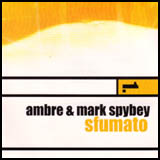 While Ambres other side projects such as Torsion and Axiome are more focused on distorted industrial chaos, this collaboration with Mark Spybey is exploring the universes of electro-acoustic, ambient music and minimal electronic. Its giving the listener the opportunity to discover a very singular world made out of random jazzy samples and very touching harmonies. The result is very well organized but as none of the members of this collaboration are well behaved, this disc is giving you the chance the get many surprises even if you are already familiar with the former productions on the two entities. We hope at Hushush that many of the new ways explored here are going to give birth to new projects.

Reviewer: dahszil - favoritefavoritefavorite - January 31, 2014
Subject: not bad, a little too "dark", downtempo for me
Everything creative is good in the sense that humans did something with whatever media and completed it. So i don't really like to be critical. However for my nervous system and mind I need a little more uptempo, higher register, and a little more sounds and music going on I guess. Although I much like this piece by a Japanese artist(name?)and its like an hour of one note being modulated, and increasing and decreasing in volume. It really does help you to be in a healthful trance i suppose. healthy or not i like it. So i am sort of a hypocrite to say i can't stand minimalism

Reviewer: mikemarmo - favoritefavoritefavorite - September 3, 2007
Subject: quality stuff
the tracks are industrial ambient mostly good but certain tracks, all experimental in nature, are just too annoying to sit though to finish